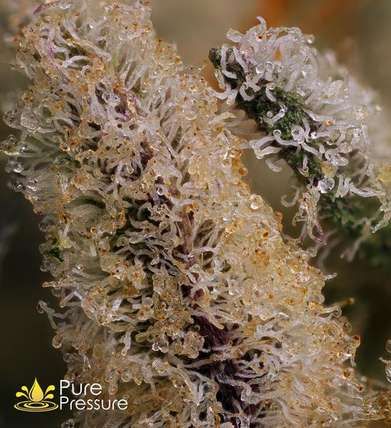 What Are Trichomes?
Starting with the broadest cannabis definition, trichomes are the microscopic, sticky structures found on cannabis plants. Covering much of the bud, trichomes are responsible for the production of what makes a cultivar unique. Trichomes are central in producing the plant profile, including the development of its cannabinoids, terpenes and flavonoids.

Trichomes are far from exclusive to cannabis strains. These fascinating components to plant life can be found on various species, including carnivorous life, where the trichomes aid in capturing food. In most cases, female plants carry more trichomes than males.

Trichomes vary in shape and size depending on the plant species. Several can be found in cannabis alone, with the three serving most prominent ranging from 100 to just 10 micrometers:

1. Bulbous: Small in stature and found across the plant's surface, these trichomes are so small that just a few cells make up its entire profile.
2. Capitate sessile: The middle-sized of the Big Three of cannabis trichomes, capitate sessiles are found in larger abundance than the bulbous variety. In addition to being more prominent, these trichomes contain a head and stalk.
3. Capitate-stalked: These are the largest of the bunch, found between 50 and 100 micrometers. Large enough to be seen by the human eye, capitate-stalked trichomes contain hypodermic cells that support a basal cell attached to the waxy glandular head. The large gland is key in the plant's synthesis of its cannabinoids and terpenoids. 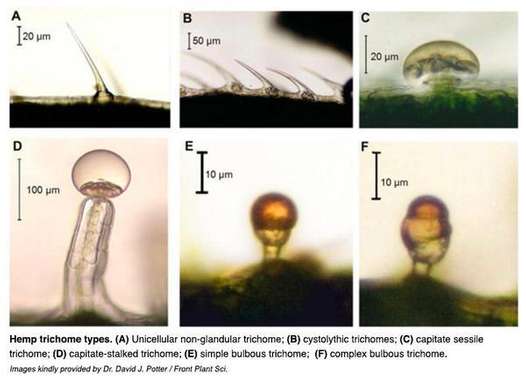 In addition to the more prominent glandular examples above, non-glandular structures, like cystolithic and non-cystolithic trichomes, are also found in cannabis plants.

The various types of trichomes do serve one central role in protecting the plant. Trichomes are vital in the cannabis plant's defense. Protecting the flower from fungus, and animal predators, like flies, the sticky goo wall of the abundant structures acts as a repellent that most unwanted elements steer clear of.

Trichomes also repel the sun to a certain degree. The same gooey barrier that blocks fungus and flies absorbs UV rays like a sunscreen would on a human.

Trichomes are valuable beyond its amazing capabilities previously listed. In addition to protecting and developing the plant, the color changes of the trichomes allow growers to know when a cultivar is ripening. Beginning in a clear stage, trichomes will, over time, change their hue to a milky white and then into its final coloration stage. When the colors are prominent, cultivators know its time to harvest.

One common misconception about the color change of trichomes is that they do not in fact fully go from clear, to cloudy, to amber, but the basal cells at the base of the trichome head do in fact change color, which affects the light refracting throughout the head of the trichome. The more you know!

And finally, in a feat that's near and dear to the hearts of extractors, trichomes are responsible for what is known as kief or sift. The easiest of all concentrates to extract, sift is created when the fragile trichome heads break free from the plant. The plant will lose its characteristics as more trichomes fall. However, those with accumulation tools from bags to grinders, can gather the fallen elements for use on top of consumable items, or in the production of top-shelf extracts like rosin and solventless hash when repeatedly cleaned with screens and static electricity.

Not All Cultivars Make Viable Solventless Strains
Not every cultivar is going to serve solventless extractors well. This is an issue that numerous producers run into at some point or another in their production journey. Finding answers isn't as easy as one may think either.

While the data lacks the peer-review evidence, our team of experts have concluded that roughly one out of every three strains serve solventless producers well, as of this writing. In the future, as more geneticists breed strains that work well for solventless processing, this number will surely increase, and already is. When looking for a viable strain for extraction, we're looking for the needed bud structure and trichome head size that yield well under a solventless extraction process.

In short, producers look to avoid the all-too-often trichome detachability found in roughly two-thirds of strains in production. Structures must withstand natural elements, including ice water, heat, freezing and pressure that come with the various forms of solventless extraction.

When it comes to hash there are patterns to strains being chosen by genetic hunters. When looking for ideal hash trichomes, hunters seek out those needed structures and head sizes. That said, they’re also on the lookout for new flavors and aromas that pique their interest--with source material coming from their backyards to grows around the world. 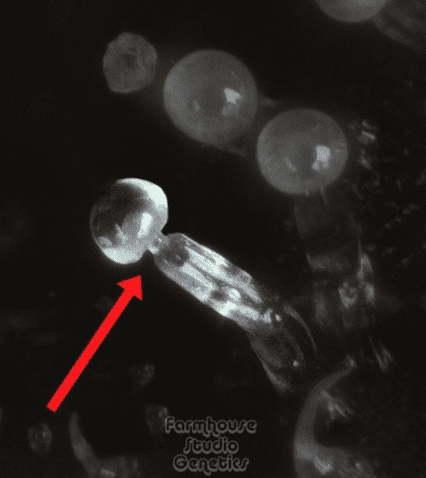 Regardless of its source location, hunters are on the lookout for large trichomes with prominent glandular heads and weak necks, which are exemplified by master cultivators like Farmhouse Studio Genetics. Going more in-depth, an ideal strain should contain more resinous material, meaning the washing stage should take longer. It will find itself somewhere in between having its resin too locked inside and not having enough to produce the needed oil.

For the most accurate results, hunters will use a tool like a magnifying glass or jeweler’s loupe for the best vantage. Once a producer feels like they have a strain that suits their needs, they’ll run test batches until they feel confident to move along in the production process.

Be sure to watch our recent solventless FAQ which identifies some of the top strains for solventless extraction.

While this process has been all the rage during the rise of cannabis extracts, its supremacy is continually challenged by advancements in solventless technology. We believe that consumer demand and tech advancements should continue to spur a shift in the market that will soon see rosin and solventless hash being the preferred option across the supply chain.

About the author: Jim Pryor

As a representative of Can-Hub I am regularly in contact with Can-Hubs suppliers and customers worldwide and am always happy to chat cannabis. I have worked in the horticultural sector for over 30 years across all facets of the industry and really enjoy helping my customers meet the challenges of the fast-moving cannabis side of our industry.

Do you have questions?

Please contact our product specialists through the form below, we will respond in less than 24 business hours.

Articles that may interest you

View other articles in these categories: 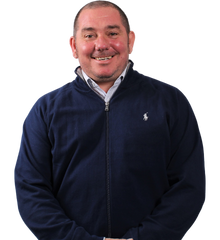 Or join us on social networks: